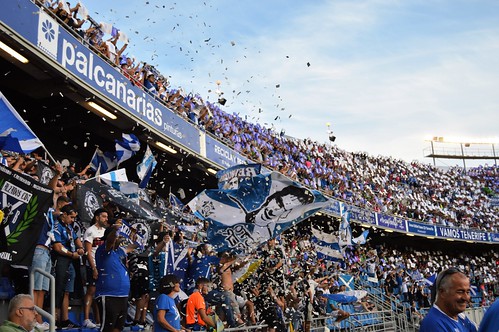 One man short and a late penalty called against them, it´s no wonder CD Tenerife were relieved to get a 0-0 home draw with inter island arch rivals UD Las Palmas. Summers ten man tidal wave of signings has so far translated to just a trickle of new faces on the pitch and the lack of goals is already a concern. Progress is slow for Tenerife but two of the new players, goalie Adrian Ortola, and midfielder Alex Bermejo led the rallying call for those still in the shadows. 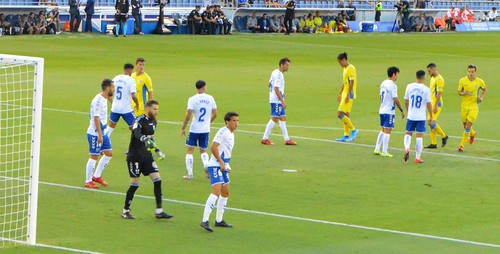 Slovakian left back Robert Mazan had been underlining his name in the starting line up but international duty meant Isma Lopez got a recall. Chief culprit in the previous weeks 4-0 pasting at Ponferradina, Nicola Sipcic was dropped with old reliable Carlos Ruiz taking his centre back role. Curbelo gave the yellow visitors the first chance but missed by some distance after a mazy run. Tenerife swept a shot wide at the other end and a brilliant tackle by Luis Perez stopped Bela from setting up another Las Palmas effort, and set the tone for a nervy battle of two sides down at the wrong end of the table. 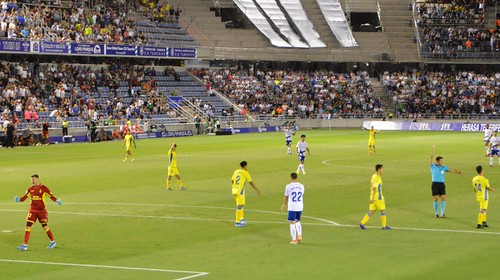 The Gran Canarian team have had money problems and trying to enforce wage cuts on players hasn´t made for a happy ship. Earlier in the week, 16 year old Tenerife born Pedri signed for Barcelona in a transfer worth a possible five million euros, and was promptly loaned back to Las Palmas. It´s a heavy burden to carry and the midfielder struggled to show glimpses of his potential. Malbasic held his place up front for Tenerife, he blows hot and cold but was a Saturday night iceberg when he was needed. The old clumsy touch and slow responses were back. Bermejo was starting to make openings from midfield but they needed a responsive striker. 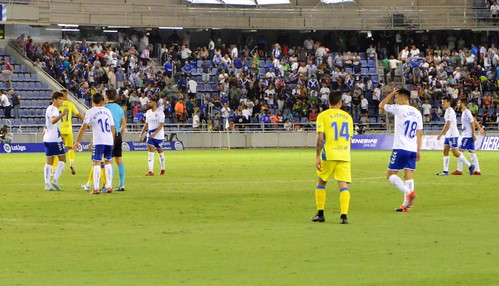 Ortola was the hero when Las Palmas made a quick break after 20 minutes, he tipped a fierce shot up and off the underside of the crossbar to deny a sure goal. Aitor Sanz was no slouch when Lopez made a poor clearance, the midfield veteran kept a cool head and cleared the danger. After Tenerife failed to inflict damage from a Perez earned corner, Aitor was in action again at the other end with a smart header to keep Las Palmas out just before the break. The second half opened with goalie Martinez flattening Malbasic but getting awarded a free kick just outside his area, it looked closer to inside the line and a possible penalty but VAR didn´t want to get invloved. Bermejo darted through a gap down the left and fired at shot that found the keepers waiting arms. Martinez was pushing his luck with the ref, he fell and rolled blaming Malbasic but it was flattering the Serbian striker to suggest he was that dangerous. 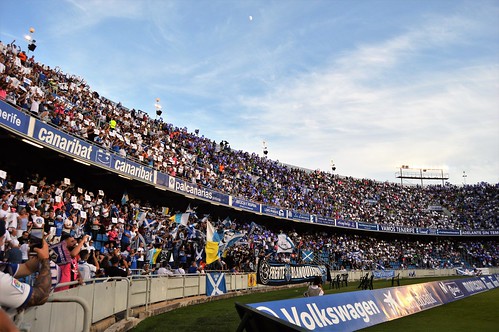 Losing Luis Milla was a blow for the home side after 67 minutes, the midfielder went for  a  losse tackle on Pedri, it was the first red card for the 26 year old in his senior career, he will sit out one match. Ramon Mierez took over from Malbasic to add to his brief debut the previous week. The Argentinian forward won a high duel and flicked the ball off to Bermejo, he controlled it before shooting just wide, but it was a promising link up between the pair. Ortola had to make a couple of smart saves as the action switched ends, and Luis Perez, again outstanding, tested Martinez with a high cross. The 18,000 crowd felt the tension rise as Las Palmas had a penalty shout for a foul on their goalie, the waits seem to get longer but VAR squashed the claim. Five minutes of added time turned the screw but a draw was probably the fair result on the night. Two away games in five days will be a fierce test for Tenerife, they will need to blood the three untried new players, including former Spurs and England youth player Samuel Shashoua, once he is fit.