Player and tactical innovations are all well and good, as long as you don’t overlook the basics. Coach Aritz Lopez Garai made surprise changes after impressive away performances, giving full debuts to American right back Shaq Moore, and Argentinian left winger Nahuel Leiva. Newly promoted Fuenlabrada were much less adventurous but played a hard, frustrating style and nicked a 0-1 win with a late opportunist goal. 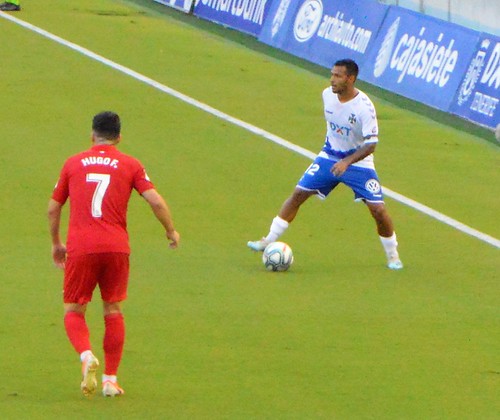 Sitting fourth in the table, the reds showed no fear of their hosts, Juanma tested Tenerife with an early long drive, Ortola dived well to tip it aside. Moore was following the coach’s attacking philosophy but didn’r have the speed to recover as well as Luis Perez, the man he had displaced. On the other flank, Nahuel looked well off the pace, he only got a few games on loan at Deportivo last season and his fitness and contribution were poor. Mierez continued to look the part as the central striker, shielding and controlling the ball well but he couldn’t get a clean shot on goal. Malbasic was having a running battle with Glaudar, who blocked his effort when trying to tuck the ball goal side of the post. 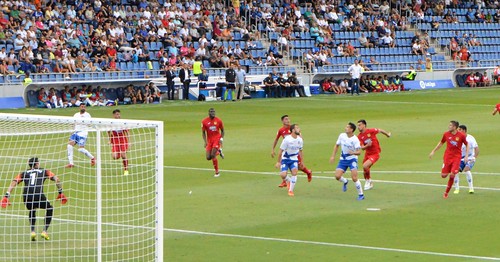 There was still an air of confidence from the 11,291 crowd going into the second half. Tenerife crashed a free kick straight at a defensive wall and it was clear that changes were needed to add a bit more punch. Captain Suso was a strange choice for the first sub, Alex Bermejo would have been a better left sided option to replace Nahuel. The departing player sulked off snarling without the usual slap of hands for the players on the bench, he had already upset the club by announcing his summer arrival on social media weeks ahead of the official announcement. Luis Perez took to the pitch a minute later to relieve Moore, with Malbasic trying his luck on the left and Suso in his usual right channel.

It wasn’t making enough difference, Mierez had a shout for a penalty when bundled over in the box but the ref’s attention was on a tussle at the corner flag. The striker then made way for Dani Gomez but the killer blow arrived with the ref again failing to act. A long ball from Fuenlabrada caught the home defence cold expecting an offside whistle. Salvador was sharp and shook off a half tackle from Alberto before slipping the ball past Ortola for the lead. It was poor defending, Tenerife didn’t show enough spirit or confidence to get back into the game, even with five minutes injury time added on. Robert Mazan found time to get sent off for telling the ref what he thought of him, getting booked, and then immediately confirming his opinion to double up to a red card.

Plenty for the Tenerife coach to chew over this week, seven games gone, his first real criticisms, players smiles slipping, and the new ex Spurs Brit, Samuel Shashoua still not fit. No one said it would be easy.