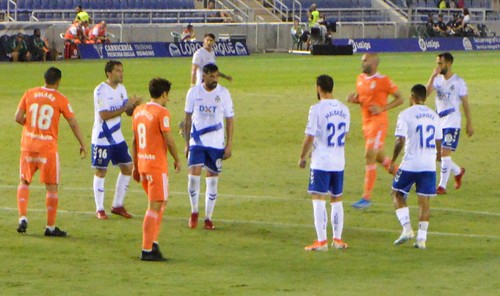 Home is where the heartache is after two poor defeats at the Heliodoro Stadium in four days for CD Tenerife. It highlighted their worrying Santa Cruz form, especially when compared to a rich vein of wins on their travels. Real Oviedo and Extremadura both made a nonsense of their lowly positions to plunder six points and leave Tenerife’s aspirations in tatters. 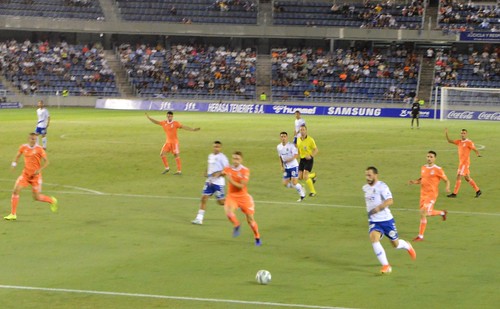 Embraced and escorted off the pitch by jubilant team mates, Real Oviedo goalie Champagne had the last laugh for again playing the clown on a visit to CD Tenerife. Home fans would also point to a delayed and disputed VAR penalty denial that played a part in the 0-1 Wednesday night defeat to the win less, bottom placed visitors. Even the long established inability to beat “inferior” teams, and failure to establish winning streaks were mentioned but Tenerife were sloppy, negative, shot shy, and so easy for their orange shirted visitors to wind up. 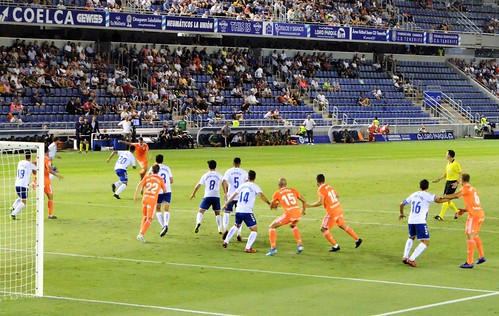 Coming off a wonderful 1-4 win at Lugo, confidence should have been overflowing but Oviedo had the first decent chance. Barcenas drifted in from the right to slice a shot wide of the home goal. Malbasic and Mieroz were getting in each others way up front for Tenerife and Bermejo was not at his scintillating best of previous weeks. Ortuño was looking dangerous and wasn´t too far off target with his free kick. After 24 minutes there was a near copy of the lone goal in the previous home defeat. A well measured ball from Sangall outstripped Carlos Ruiz and found Barcenas who shrugged off Luis Perez and fired the ball under the diving Ortola. 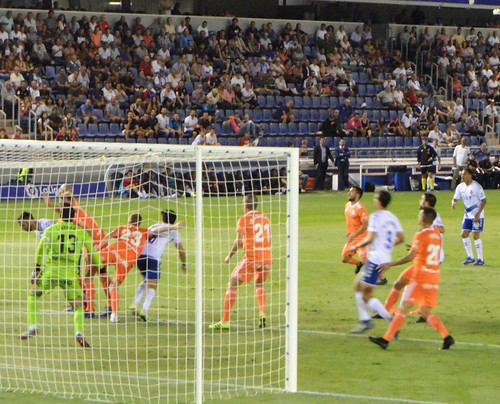 A quick break and Borja Lasso headed a shot at the Oviedo goal, a defender blocked it with his hand, his reaction and the refs instant point to the spot signalled a penalty. VAR had other ideas, and highlighted a Tenerife offside pass way back in the build up, and after the usual drawn out wait, the spot kick was cancelled. The half time feeling in the stands was still that Tenerife had the fire power (9 goals in the last 3 away games) to stick the form book back together. A sniff of a win was all Oviedo needed, out came the diving, delaying, and disrupting tactics. Nahuel came on for Bermejo, and Suso for Mierez to change the home front line. Nahuel gave a much better account of himself after his dismal debut in the last home game. The Argentinian left winger teased the away defence and opened them up but there were no finishers waiting. Suso worked the ball in from the right and passed it across to Malbasic, his neat back heel was a bright idea but couldn´t find a team mate.

Champagne was having problems with gravity, after several theatrical falls he got booked, it didn´t stop him from gathering the ball from the pending header of Aitor Sanz. The keeper followed that with some early pantomime as he fell to the ground in the shadow of his diving defender, maybe he was just showing solidarity. Dani Gomez was a late replacement for Sanz, Champagne snatched a half chance from Malbasic but even the added VAR time couldn´t yield a home goal, for the third time on the trot. 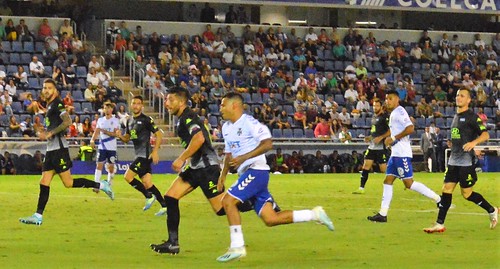 It was an attack minded line up a few nights later against Extremadura. Naranjo was the surprise recall in a more central role, with Mieroz benched, and Nahuel holding his left wing spot as Bermejo slotted in just slightly deeper. Hope hardly had time to get comfortable before an Alex Diaz high ball into the box, Carlos Ruiz, one of three close defenders, missed a tackle on Zarfino who gratefully tucked the ball into the home net. Luis Perez tried for a quick reply, setting up Bermejo for a wayward header, Naranjo was also wasteful, turning an easy nod in, into a glaring miss. Extremadura were basking in their lead and tested Ortola who produced a late punch clear of his goal. It was VAR time at the other end as Munoz squeezed a Naranjo pass in at the post, as the keeper scrabbled in vain to stop it crossing the line. There was just time to bake a cake or write a novel before technology told the ref to give the thumbs up for the equaliser.

There was no time to relax for Tenerife, Willy was bearing down on the home goal, Munoz showed his quality with a snappy interception to clear the danger. Pastrana was denied by another diving save by Ortola, and Rocha exposed Carlos Ruiz and was grateful to Perez for mopping up. Second half nerves were jangling as Ortola spilled a shot just after the restart but a counter attack saw Bermejo clear the bar from a Naranjo pass. Malbasic was getting involved more even if his shot was too weak to trouble the goalie. On the hour Borja Lasso came on for the subdued Luis Milla, it added some urgency and woke up Nahuel whose pass to Mazan forced some stern defending. Dani Gomez was a straight swap for Malbasic when maybe an extra striker would have been a risk worth taking. Naranjo never fails to depress, he wasted good build up work from Munoz with a weak finish, even his recent weeks of obscurity hadn’t sharpened his appetite. 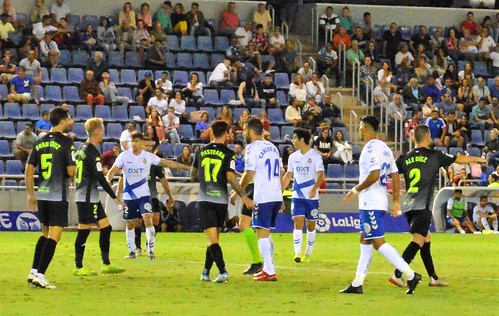 Disaster followed as Extremadura sub Nono dispatched a penalty, after Carlos Ruiz had held him back with 15 minutes left. The final home change brought Mierez on, he did add a threat in the air but Bermejo giving way for him was a costly sacrifice. Tenerife piled on late pressure but their aim hadn’t improved. Naranjo should have ensured himself another lengthy spell in mothballs after another soft attempt on goal. Gomez was lively but couldn’t convert good positioning into the finished product. Just four minutes of injury and VAR time were added, long enough for Borja Lasso to pull Alex Lopez back and convert a booking into a sending off, his second in just over a month. It was just another blow for the 9,876 crowd as three more home points evaporated into the night air. There are goals in this squad, at least on away soil, but the mental block at home is feeding frustration and the team slipped into 16th place.