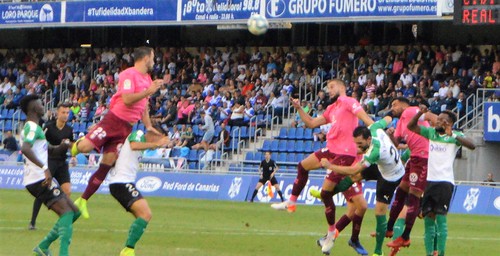 Attacking flair and great finishing built a 3-1 home lead for CD Tenerife but Racing Santander snatched a 3-3 draw as basic defensive errors undid all their good work. Wearing their pink away kit at home to mark Breast Cancer Awareness Day was a nice gesture from the Santa Cruz club and it matched their blushes as they tormented their fans with their big throwaway. 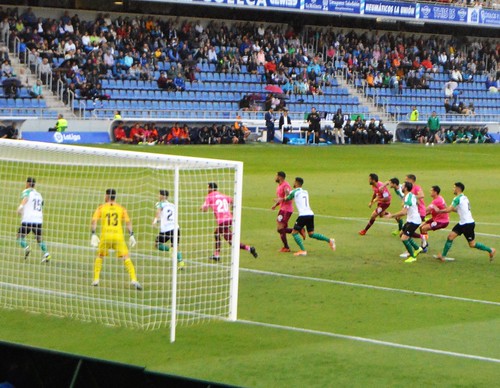 A big statement of intent was needed to lift the home fans, an early shot from former Tenerife midfielder Kitoko was a warning to not underestimate the third from bottom visitors. Just 12 minutes into the action, a fast, slick build up saw Alex Bermejo drop a well flighted ball over the Racing defence for Malbasic to slip it under goalie Luca Zidane. The 21 year old loanee from his famous fathers club had plenty to worry about as Nahuel showed he was equally at home on the right as on his normal left wing, and Bermejo always looked threatening on the other flank. A long free kick from the Racing full back was taken comfortably by Ortola but Tenerife were enjoying themselves as the heavy rain poured down.

Luis Perez was having another superb game from right back, he had the vision and the speed to reach a lay off from Nahuel and cut it back for Bermejo to give Zidane no chancewith a sweet strike. This was more like it, the 8,525 crowd sensed the chance to kick start the slumping season. Then came the first big lapse, Alberto only had to do kick the ball out of play to stop Lomardo near the post, but he tried to over think it and the striker made him look like a novice as he buried the ball in the net. That gave the half time break a whole different complexion. At least Tenerife regained their superiority five minutes after the restart when Luis Perez was outstanding again, this time scooping a lost ball back from the byline into the path of Borjs Lasso for a bullet header. 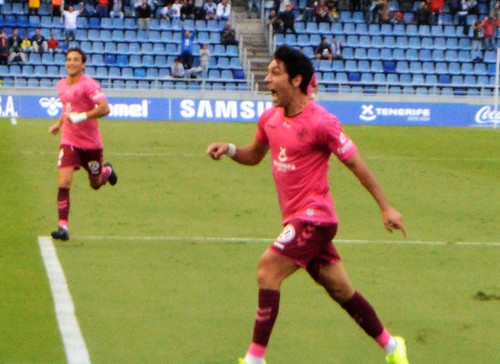 Just six minutes later a slack kick out from Ortola was fumbled by Alberto and Lombardo pounced to march through and reduce the arrears. Borja was ploughed down by a Racing player and after a few minutes of discomfort, was replaced by Aitor Sanz. Suso came on for Nahuel, those moves robbed the team of two of the main play makers, and the arrival of striker Mierez for Malbasic weakened the goal threat. Tenerife should have pressed harder, Zidane kept wandering far out of his goal, he needed to be pressured more. It all made for a nervous last 30 minutes. Suso charged inside but was fouled by Olaortua, and that was about the best chance Tenerife had of putting more distance between the two sides. Racing had six players booked, all that card flashing added up to four extra minutes, and it wasn´t pretty.

Luis Milla broke on the left with two players coming up in support, he tried to do too much on his own and lost the ball after running it on too far. Then in the last 30 seconds a gifted Racing free kick sailed over and was headed past a slow Ortola by Yoda. Home fans trudged out with the whiff of a defeat in their nostrils – that´s how it felt. Slipping down to 19th spot, after match talk was of coaching responsibilities, and out of form players like Milla and Alberto.