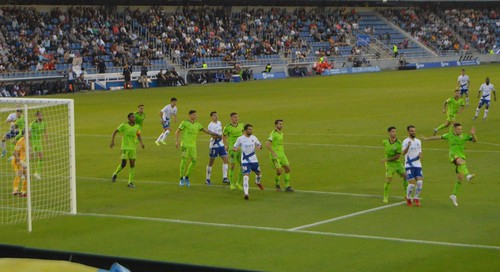 They say when you drown, all your previous lives flash before your eyes. For CD Tenerife President Miguel Concepcion, the coaches during his 14 year reign paraded past his vision during a 19th minute fans protest in the 1-3 home defeat to UD Almeria. Current caretaker coach, Sesé Rivero, the 19th team selector, followed his opening 0-2 away win at Sporting Gijon with a spirited but defensively flawed loss against the big money second placed team in the Segunda Division. A few days later, Ruben Baraja became coach number 20. But there are bigger moves afoot to wrench the club out of the President´s hands.

On a day with so many personalities worthy of attention, the referee grabbed the early spotlight, ignoring a foul on Dani Gomez on the edge of the box. He then gave a free kick in a similar position against Tenerife at the other end – and booked home goalie Ortola for complaining. There was some satisfaction for the keeper when he turned aside the resulting shot. A strong headed clearance from Carlos Ruiz defused an Almeria raid on 20 minutes but the home defence were tactically poor seven minutes later. Three white shirted defenders got all bunched up on the right and were unable to stop the ball bouncing free to Lazo for an easy tuck in lead. 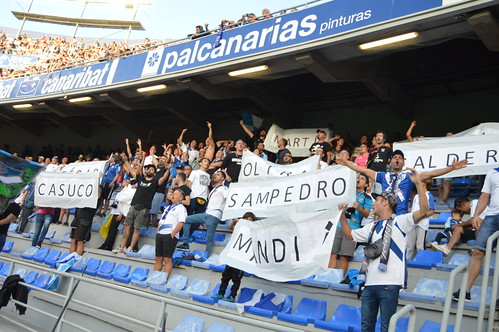 Just after the half hour, it was the same crime and same scene as three defenders hugged the right side and let an attacker slip through with the ball falling nicely to Lazo for his second goal. Tenerife heads didn´t drop, Gomez forced a corner off the keeper, Suso swung in a perfect ball, and Borja Lasso smashed it in off the post. Aitor Sanz made a slide rule pass deep to Suso that wasn´t finished of, and Almeria goalie Fernando showed encouraging nerves with a soft kick out. There was plenty still to play for at the break. Nahuel had been quiet on the left in the first 45 minutes and was soon replaced by 20 year old winger Elliot Gomez, following in his brief debut at Gijon. The youth player looked strong, confident, and full of running to give Almeria a few problems. Shaq Moore showed a more forcefull side of his nature and helped to keep the visitors in check in the second half. 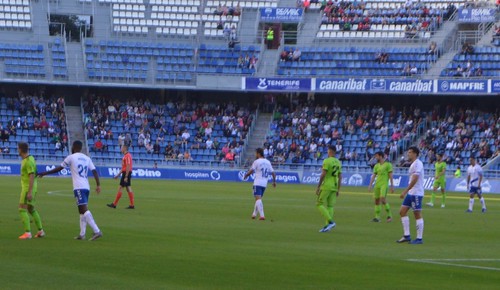 Ortola made another classy save on the hour and Malbasic arrived for Alberto to boost the front line. However the Serbian´s first touch was his weakness again when Dani played a ball back to tee it up for him and he blasted it over the stand. Borja was busy looking for openings and had big defender Owana tied in knots. Almeria were a good side, and didn´t even use their 8 million euro signing from Notingham Forest, Arvin Appiah. Tenerife were making headway, Almeria goalie Fernando resorted to feigning injury whenever possible to buy time. Rivero will leave a small legacy behind when he drops back into the youth coaching system, Another of his gems, Jorge was a surprise sub and came on in place of Dani Gomez. There was nearly a dream glimpse of the future as Elliot slipped a neat pass to Jorge but he didn´t have the power to take it on or the back up. With five minutes of added time, Munoz made a crude sweep past Fernando and gave him a little body check, he thought he had got away with it but the ref booked him as play switched to the other end, that takes him up to a one game suspension. A last gasp break found Aguza who caught Tenerife napping to wrap up the 1-3 win. Calls for the President to go were louder and more prolonged as the 12,394 crowd filtered away from the stadium.