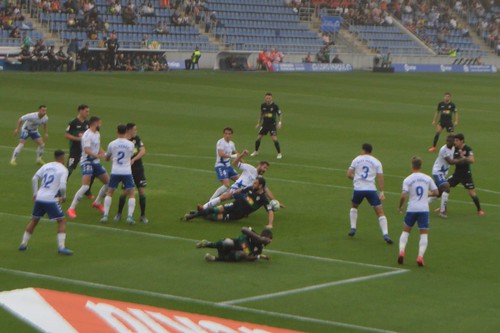 Multi coloured wigs, garish dresses, and fantasy figures filled the Heliodoro stadium with joyous song as CD Tenerife beat Elche 1-0 in the Santa Cruz Carnaval game. But top billing of the afternoon went to the mean spirited home defence as they underscored another impressive team performance. 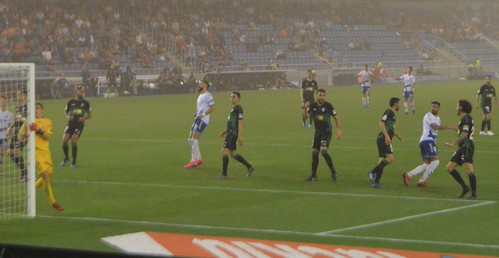 The gradual encroachment of the thick sand and dust calima turned the sky into an oppressive hot dome but it was the 6th placed visitors who looked parched and drained by the end of the game. Former Tenerife scoring legend, Nino, may be 39 now but he led the visiting attack and his wide shot after 7 minutes was a warning that he still has goals in his locker. At the other end of the pitch, and age scale, Dani Gomez, a mere 21, boosted his growing status with his 6th goal of the season. A headed ball down to the young gun was hooked to his right and despatched between goalie and post.

Home coach Baraja has instilled a sense of team responsibility, Dani even came deep to cover for Elche´s few forays forward. Luis Perez and Alex Munoz were keen to turn defence into breakaways, Perez is being courted by several La Liga teams for next season but he was as consistent and focused as ever, he made Cruz look like a novice when he nicked he ball off the forward. Alberto is also attracting envious eyes at a time when he is back to his brilliant best. The central defender was strong and aggressive but without the lapses in concentration that had haunted his early season form. Sipcic, alongside him, has upped his game too as shown with his perfectly timed header to defuse Pepe Milia. 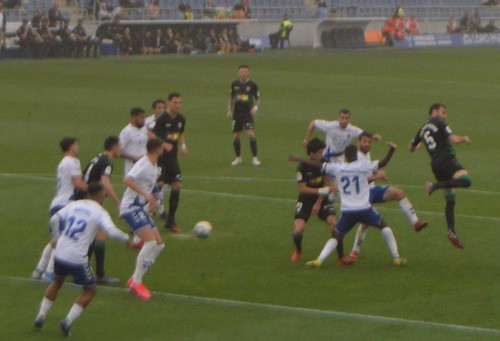 What would Carnaval be without a clown? VAR and the ref filled that role with the worst example so far of man and machine in perfect disharmony. The ref with no clear incident or complaint, checked in with VAR and then gave a free kick way out in midfield with no bearing on any game affecting offence. Dani Gomez started the second half with another close shave at goal and just past the Elche post. Munoz had a half chance after Shaq Moore had made good inroads down the right wing as Nahuel worked he left flank. Joselu´s early goal burst after his January arrival, had been quiet in recent games but he worked hard and was sharp to turn into the box and poke a shot just beyond the post. The tall striker had a penalty shout when Verdu bundled him over but VAR was having a nap.

Javi Munoz and Mazan took over from Joselu and Nahuel for a cautious last ten minutes, and forgotten striker Mierez,got another few minutes run out to encourage his return to favour. There was still time for Dani Gomez to be clattered over when in a promising position. The score held as the home crowd poured out into the night to lubricate their calima dried throats. The revival trundles on and even the awful weather couldn’t obscure that.