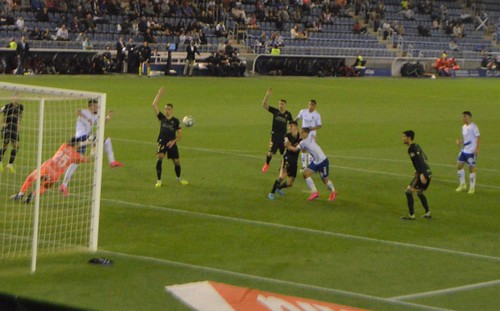 Masks, gloves, and bizarre pre match rituals were making headlines across European football, but in Santa Cruz, the home  crowds hand wringing was over poor eye sight. The dreary first half should have produced at least a CD Tenerife goal from the spot after a blatant defensive hand from visiting Ponferradina. At least the refs focus was better for the 77 th minute winning header from outstanding home defender Sipcic to seal a 1-0 win. 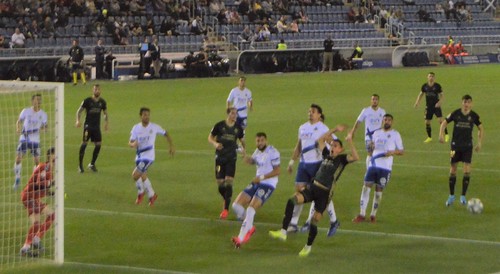 The creativity of midfield maestro Luis Milla was lost to a suspension but Undabarrena got a rare run out and worked hard to break uppromising early moves from Ponferradina. Shaq Moore also serving a one match ban, was a more difficult gap to fill. Daniel Lasure overcame an uncertain start on the left as Nahuel switched to the right. Neither side showed much first half flair, too many square balls and back passes sucked the excitement out of the game. The best opening was made from a deep ball that Dani Gomez held up only to see Nahuel snatch at this shot and clear the crossbar. 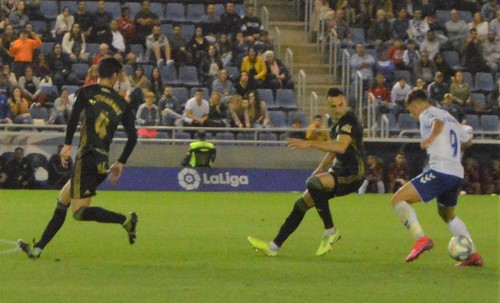 Ponferradina arrived in 8th place and had two good play makers in Omar Ramos and Nacho Gil but neither sides goalie had much wear and tear on their gloves in the first 45 minutes. The second half perked up a bit. Lasure started to show some ideas, and a goal mouth scramble saw the visiting keeper get a viral touch to the squirming ball as Dani Gomez tried to toe poke it over the line. Another corner from sub Javi Munoz needed a stretch from the goalie to ward it away.

Bermejo replaced Nahuel on the hour but he was still some way short of match fitness and the sparkling form he showed in early season. Dani Gomez tried a nifty interchange with the newly summoned player but it didnt quite work. Joselu´s goal scoring form after his January arrival has evaporated and he gave way to captain Suso. Sipcic has grown into a dominant central defender and also adds threat to set piece attacks. Another Javi Munoz corner was met by the Serbian´s glancing header as an away defender played him marginally onside. The goal was a fitting reward for the dogged determination of Tenerife. Otola was awoken from his slumber in the home goal to expand his muscles to tip a dangerous shot past the post to secure the three points. 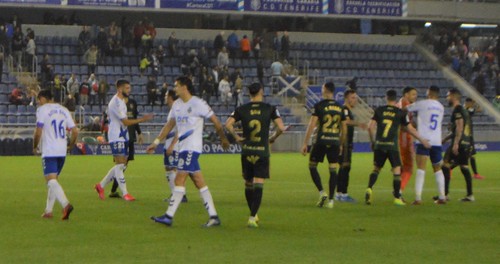 It was not a scintillating performance from Tenerife but coach Baraja has added a steely resolve to the squad and the 9,392 fans were even more delighted to see that the win leapfrogged the team above inter island rival Las Palmas. Both sets of players showed the usual respect at the end of the game by embracing their opponents but the shadow of the Corona Virus outbreak was destined to throw more challenges in front of the upward charge. The next two games will be played behind closed doors, the second of those being a real relegation six pointer at home to Malaga – oh yes it´s still that close.